Every year on the last Monday in May, Americans gather together at parades, festivals, and family parties to honor our military heroes who selflessly gave their lives in the line of duty on Memorial Day.

The tradition of Memorial Day remembrance is one that is near and dear to our hearts and roots as a country, but we’re willing to bet that there are some interesting things you may not know about this special occasion.

In light of that, here are six cool Memorial Day facts you may not know to read through the weekend.

Traditions of remembrance for fallen heroes dates back to the time of ancient Greeks and Romans. Each year, graves of loved ones were adorned with flowers, and festivals were held to honor the dead. Similar events were also done in Athens with one of the first known celebrations held to honor Pericles, a strong Athenian general. The first Memorial Day in America began in the 19th century.

One of the earliest documented ceremonies was held by over 1,000 freed slaves on May 1st, 1865. Groups of troops, such as the 54th Infantry, joined the newly freed men and sang hymns while distributing flowers among the tombstones in the cemetery. This event occurred near the end of the Civil War.

Before Memorial Day was actually called Memorial Day, General John A. Logan first issued a decree that today would be dubbed “Decoration Day”. Early Americans received this notion well, and ceremonies took place in more than 27 states within the first year.

#4 – From Decoration to Memorial

Even though the term Memorial Day started gaining traction in 1880, it wasn’t until the Uniform Monday Holiday Act of 1968 finalized the new celebration date and name. There was a ton of controversy that surrounded the changes for quite a few years from many groups, but as we can see, that settled.

Believe it or not, there is a lot of rivalry surrounding the topic of who celebrated Memorial Day first:

Only one town has federal recognition to back up its birthplace claim, and that is Waterloo, New York. They have the official U.S. Government seal of approval for their 1966 celebration.

Although more and more people are happy to celebrate Memorial’s Day as an annual summer activity, there are many traditions that have remained strong through time:

From The Carpet Guys family to all of you, we wish you a happy Memorial Day. Thank you from the bottom of our hearts to those who have paid the ultimate price for our freedom, and thank you to the families of those brave souls. If you’re interested in checking out our best Memorial Day deals, click HERE! 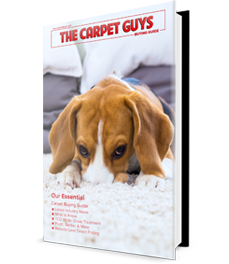 Learn how to buy carpet the right way

Get a free copy of our carpet buying guide today and we will walk you through the entire process, start to finish.

UP TO $500 AMAZON GIFT CARD**
Minimum purchase required with selected in-stock carpet or flooring and installed by The Carpet Guys. Must have a free in-home estimate and qualified purchases must be installed on/before Tuesday, December 20, 2022. Valid only at the initial consultation. Cannot be combined with any other discounts or promotions. Cannot be applied to current or past orders. Some restrictions apply. See sales consultant for details. Gift Cards will be sent to customer via email within 7 days after the project is installed and paid in full. Offer valid for a limited time while quantities last. $100 Gift Card with $2500 purchase $250 Gift Card with $5000 purchase $500 Gift Card with $10,000 purchase

UP TO 50% OFF FLOORS*
*Minimum purchase required with selected in-stock carpet only. Includes basic installation and pad, does not include extras. Valid only at the initial consultation. Offers are not to be combined with any other discounts or special promotions. Cannot be applied to current or past orders. Some restrictions apply. See sales consultant for details. Sale ends 12/31/2022.

(PLUS) 12 MONTHS INTEREST-FREE† (OR) 24 MONTHS INTEREST-FREE†
† Offer is for new applicants only and cannot be combined with other promotional discounts or special offers. Special financing is subject to credit approval. Not all applicants will qualify. Minimum purchase and monthly payments are required. Some restrictions apply. See sales consultant for details. Sale ends 12/31/2022.

NEXT-DAY INSTALLATION**
**Next-day installation on in-stock carpet only and subject to availability.